A former military ambulance on a Dodge Power Wagon chassis, last owned by the American Red Cross - donated to TSRC. The tower trailer was custom built for the club in the late 90s, but sold later after we acquired the current military tower trailer. It was deemed too heavy and cumbersome to use. 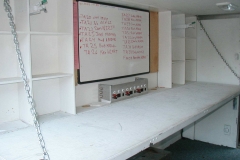 Note the power and antenna patch panel below the whiteboard. The antenna cables went to a metal patch box on the underside of the ambulance and to rooftop antennas. 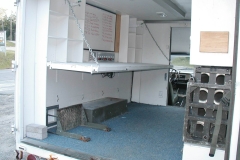 Most of the interior construction was done by Verne Burden, N5IEP. The roof replacement was done at Plasma Technologies Corp (AE1H's shop). 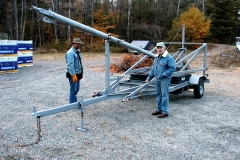 This picture was taken just before it was sold. Dave Bridgham and Don Kollisch are in the photo. 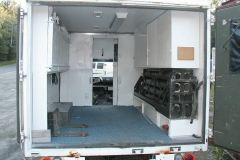 With one of our military surplus AB577 towers in it's rack, and the operating bench folded up, it was ready to roll. For some reason, the two office chairs were not inside for this photo. 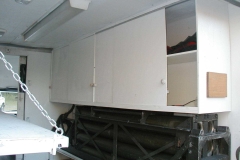 The storage bins were useful, but the rough ride often left the contents in disarray. In the end, the van had to be retired due to advancing rust and pricey insurance rates. 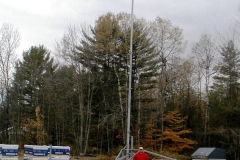 The tower itself is a US Tower MA-40. Dan K1DAN stood next to it to give a sense of scale. 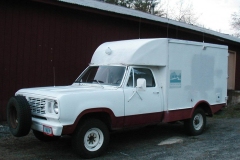 The Vermont Red Cross acquired it for a disaster response vehicle 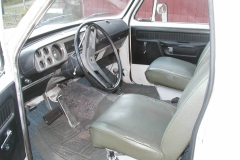 An old 2m mobile was installed up front. Driving this thing was a challenge for some, with sloppy steering and full time four-wheel drive. It could also lock in all four wheels for true four-wheel power, which meant this thing could go anywhere. It was a beast. 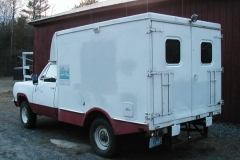 When the roof began leaking, Red Cross gave it to TSRC 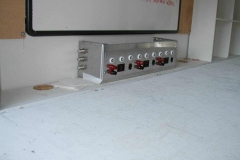 The patch panel was built on a blank aluminum rack panel, and included three sets of PowerPoles, binding posts, and cigarette lighter plugs, each with its own circuit breaker. Antenna cables terminated on either end. The end panels were custom made. 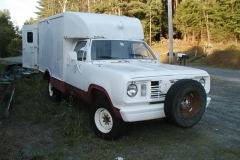 It started life as a military ambulance 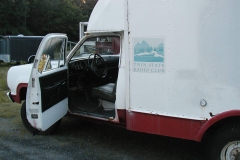 We replaced the roof and rebuilt the interior for our needs. The squad bench was removed along with the old gasoline-fired heater.